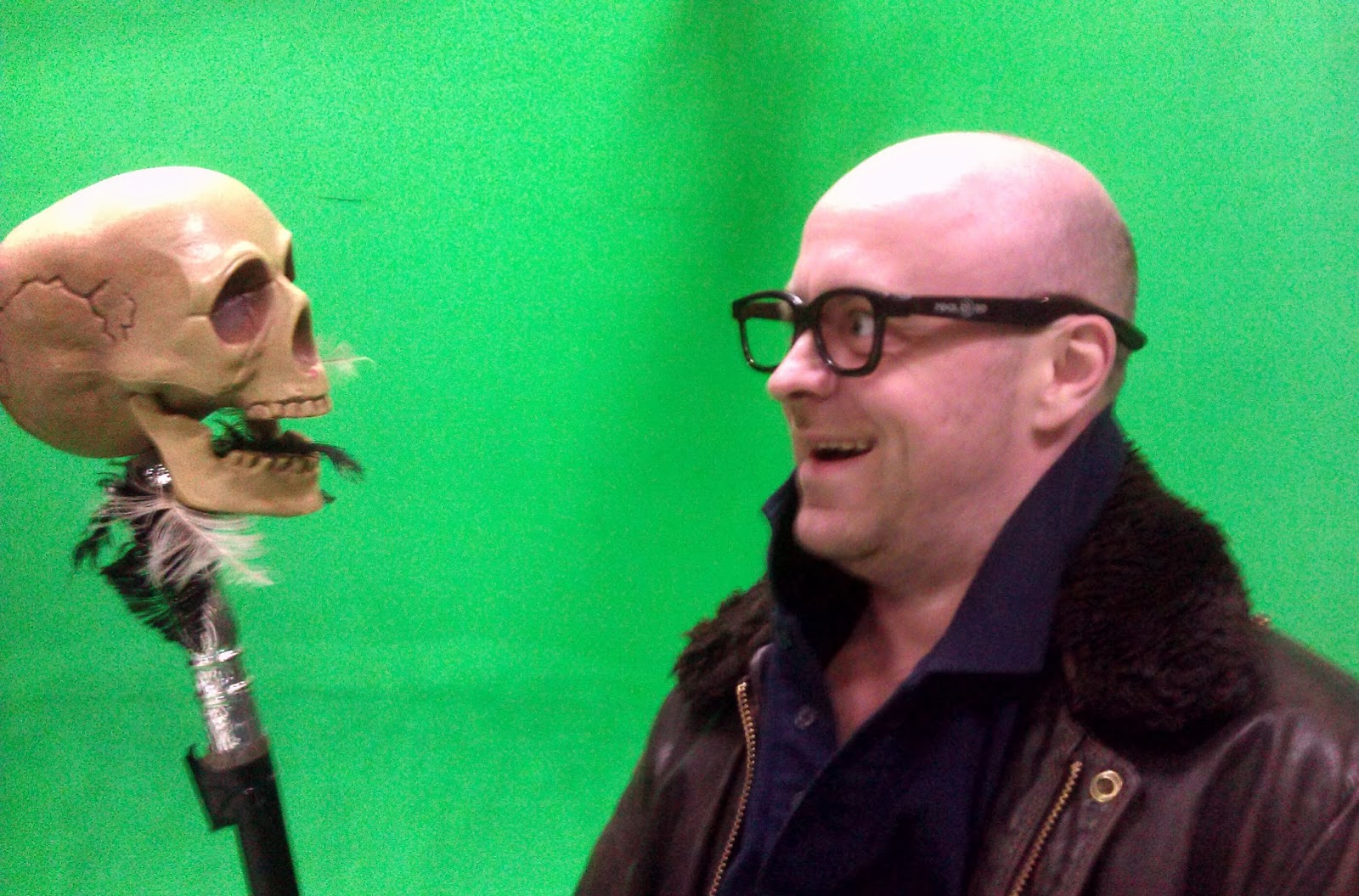 I have returned from a small hiatus, which as you probably know is Latin for bender.  I had heard that alcohol is a solution which it is, chemically speaking, so I thought why not give it a try.  I finally decided to screw the nut after I had to be talked down from a ledge earlier in the week.  Fortunately I’ve made videos for all sorts of emergency contingencies including that one and nothing calms me down like a video of myself, telling myself, to calm the fuck down.

However it’s time to come clean.  For some time now I’ve been living a lie and it’s something that I can now no longer live with because I have to be able to look myself in the eye, it’s one of the few pleasures I have left.  So here goes.  I’m not really a skank guitarist in a Scottish Ska band at all, that’s just an alter ego, an identity I’ve created and assumed.  I’m actually a rapper from the west coast of the United States.  My real name is M.C. Cafferty and I have created this character Scott McCafferty, improbably named as he is, to get taken seriously by the gods of music and earn the respect of history.  As a west coast rapper I just couldn’t get taken seriously by anyone.  Sure, I had money, women, record contracts, a swimming pool shaped like a dollar symbol, but no artistic credibility.  It was taken for granted that I was shallow and repetitive, and most damning of all, devoid of any real use as a human being whatsoever.  As they say in the west coast, it was scunnering.  I was in the depths of despair.  I knew I had to make a change and so asked myself what is the most respected and valued member of the music community, the thing with the most integrity and kudos, the thing that would give me the greatest respect from my contemporaries in the music industry.  The question answers itself really.  Skank guitarist in a Ska band.  For the illusion to be complete though, I had to be Scottish, which is the opposite of American, blue collared with a tendency to drink and smoke.  Also shout, and if I do say so myself, nailed it.

First thing I did, I turned my back on Hollywood and the oral sex and moved to Scotland, where the rain comes from and started to get into character.  I wanted to be an artist, and it was often the case that many great artists in history were unappreciated in their lifetime and often starving, living a hand to mouth existence.  I accomplished this quite easily by getting a real job that paid very little money with long hours which, through a combination of poverty and lifestyle choices, helped to reduce my life expectancy.  It was easy, I really don’t know why I hadn’t thought of it before.  In fact, it worked so perfectly it meant that when I came to do the music I was already physically exhausted and psychologically drained, giving the music that gritty realistic edge, that sense of desperation and hopelessness.  I like to call it Method Ska.

Secondly I also had to learn and completely master the guitar which was probably the most intense four days of my life.  Did you know it can take up to a day to tune a guitar correctly?  I certainly didn’t.

Next thing was research.  I didn’t know much about Scotland and everything I did know I learned from Mel Gibson and Tacitus, neither sources are entirely reliable.  I learned from Wikipedia that Scotland is where steam was invented, and also where the term ‘blackmail’ was coined.  It sounded like a desperate place.  I then started to work at perfecting my Scottish accent which I did with the help of loveable characters on T.V like Groundskeeper Willie, Sheena Easton and the Canadian engineer on Star Trek.  When you listen to me speak now it’s indistinguishable from any other Scottishes.

Next thing was finding a band.  When I first heard Bombskare my first impression was, these guys are unmistakeably diatonic.  The nuances of the major scale can be tricky especially that tricky third step, and these guys had made it so precarious they had turned it into an art form.  They managed to make a major scale sound like experimental jazz.  I was impressed, yet disturbed.  I thought anyone this ropey with this cavalier an attitude to tuning must have an almost intransigent integrity, and  these guys were oozing it.  You could almost smell the honesty from them, and touch the semi-professionalism.  I was hooked immediately.  Seeing them perform in person was actually rather sobering however and I finally understood why Ska bands are considered to be breeding grounds for monsters.  If you do a Ska Google image search you’ll see what I mean.

Joining the band was easy as it turned out.  Literally anyone could walk in off the street and join Bombskare so long as they owned or had at least part time access to a musical instrument and knew the four times table.  Everything is in 4/4.  The only requirement was the mandatory Voight-Kampff test which is pretty standard in Ska bands these days.  I passed with flying colours, because even though I’m a fake, I’m even better than the real thing.

Nowadays most people I meet, when they find out that I’m a guitarist in a Ska band, start freaking out and wetting themselves because of how cool it is.  Nothing could be further from the truth, of course.  It’s a thankless, soul destroying task like snooker or parenting.  Consider.  We are forbidden from playing on the beat, so at the begining of a song, at the ‘one two three four’, everyone goes but we have to wait that split second after everyone else to go, inhabiting that space between the beats, constantly chasing the beat but never catching it.  It’s like a recurring nightmare where you are in a race that you are forever doomed to lose.  It’s heartbreaking if you think about it, and one of the reasons for the high rates of alcoholism and suicide.  I couldn’t kill myself of course, I’m far too drunk.

Last year we probably drove about half a million miles around these British Isles, spreading our gospel.  There have been many highlights. For example the Isle of Eigg festival which was mental.  There is definitely something about people on islands that is very different from us ‘normals’ on the mainland.  We’ve been to London a few times, Brixton, Battersea and Lewisham, sorted those places out with their crippling Ska shortage.  We met up with Frankie Dan who starred in our Triplet Fiasco video.  Lovely guy.  We particularly liked The Magic Garden in Battersea which had amazing food, truly remarkable.  We recommend the steak and chips.  Thanks to Sam McLeod for coming out of retirement and Ali Wales for staying out of retirement for that one.  We went to Lochinver once again for our usual night of mayhem, culminating in a party on the beach, drunken sailing by moonlight and a lead singer lost in the woods with a fucked leg in the morning.  Basically it was like a cross between Jaws and Deliverance.  Good times.  The next day, you should have heard him moan, it was heartbreaking and hilarious.  We drove to Fort William, our next gig, and took Andy to the hospital to get his ankle checked, whilst the rest of us non-injured went to Nevis FM for a radio interview.  After the interview we went into Glen Nevis where Ali Wales our stunt guitarist jumped off a bridge into a waterfall, as one does on the hottest day of the year.  The gig in Fort William itself was on the hottest night of the year and the temperature inside the venue was so hot you could have blown glass.  Mikey Pepper on drums still managed to keep his three piece suit on until the end of the set, because he is one classy individual.  Thanks to our super subs Mandy Clarke, Mikey and Ali for that weekend, and to Tim Young on sound, and to everyone in Lochinver and Fort William who came to see us.  It turned out Andy’s leg was fine, he just had some sand trapped in his vagina.

We played at Doune the Rabbit Hole which was a first, plus The Wickerman and Solfest festivals which were great.  We particularly enjoyed the Stanley Odd and Hector Bizerk collaboration at Wickerman.  We went to York and played at a bikers festival, met Jim Keilt from Glasgow, and also made it up to the Fyne Ale Fest at Loch Fyne and the Southside Festival in Glasgow.  As usual our favourite highlight would probably have to be Skalloween at Studio 24 here in Edinburgh with the Victorian Trout Conspiracy and Hector Bizerk, both of whom were outstanding on the night.  The crowd is always fantastic and the effort that people make with their costumes, unlike us with ours, is always impressive.  The following night we went down to play at a fireworks display in Blyth, near Newcastle.  Those nights and the last few gigs of the year have been sell out shows which is great.  Thanks to everyone who came down to any of those nights, hopefully you’ll see us again.

Our most recent trip was Shetland and our third Up Helly Aa.  We were lucky to make it up because of the storms, several boats there and back were cancelled but we had been praying solidly before we left for Aberdeen and it’s widely believed that Neptune loves Ska. We were traveling up with Capone and the Bullets some of whom had no idea what was in store, except for Gordy of course who is a Shetland veteran.  He’s a Shet Vet.  The crossing was a little rougher than usual I will admit, so in a situation like that alcohol really can be a solution.  We brought the very talented Dr Michael Pepper with us for this one as Murray was off getting his vagina de-sanded.  As well as being an impressive drummer, Mikey is a formidable guitar player, and he learned all Murray’s parts in about twenty minutes.  Our squad this year had been moved up to number three, just two behind the Jarls squad, that’s the guys with the axes.  The theme tune was ‘Tequila’ which we learned in the now customary Orkestra del Bombskare, busking fashion, Buskare if you will, with drums slung around shoulders and tiny hand held amps, and played as noisily as possible.  Also our guys were dressed up as slightly suspect Mexican banditos with bandoliers of shot glasses.  Tequila flavoured beer was the order of the evening.  By 8am it was twelve halls and a couple of drunken altercations later, and the band had effectively split up permanently.  It was reformed slightly later on around 1pm because we had a soundcheck at 4pm.  It should be noted yours truly missed the halls this year as I had been asked to play guitar for Capone and the Bullets, the Godfathers of Scottish Ska at the Lerwick Legion on both nights to which I agreed, because that’s who I am, and besides it was fun to get to annoy someone else’s band for a change.  Also I got to see more of the squads which was enlightening.  As usual the Hop night was pretty intense.  Thanks to everyone who came down and to all our friends up there.  We’ll be back in April if the gods permit it.

Nothing on for the next four weeks.

We should maybe write an album.