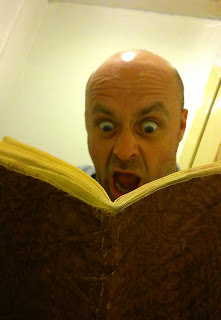 Most people thinks it takes three minutes to write a ska song. That’s what I used to think. After all, that’s how long it takes to listen to one. A common misconception. It’s actually a much more mysterious and arcane process.

Since time immemorial, ska bands have used The Nekronomiska; the Book of Ska. It is believed to be ancient, older than Christianity, possibly even pre-dating The Skatalites and for many centuries was lost, before being rediscovered in the sands of Rub’ al Khali in Arabia.  It’s origins are obscure.  Some say it was not meant for the world of the living, that it is a curse on all who use it hence the reason for it being hidden.  Others say that it is bound with the thigh skin from Lloyd Knibb’s kick drum leg, but we know that’s bullshit.  Lloyd’s chained up in the Bomblab and trust me, that zombie mother fucker is intact.

Traditionally one took the book to the sacred hilltop in the Land of Wood and Water and smoked the sacred tobacco, said the sacred words and then, miraculously the Ska appeared fully written and arranged in the book.  Incredible but true, and if you think about it it’s obvious; a song like “Catastrofuck” couldn’t have been written by a normal, human mind. It clearly comes from… beyond.  Obviously for us it’s not practical to travel all the way to the Land of Wood and Water to perform the ritual so we go to the top of Arthur’s Seat and just smoke extra sacred tobacco.  It works perfectly.  We acquired it the same way we acquired Jay Sloan; at strip poker in Alistair Darling’s sex dungeon.

Why am I telling you all this? We started this blog many centuries ago to keep people updated about the progress of our writing and recording endeavours but for the last two years there has been very little of that for one terrifying reason. The book has gone silent.  We don’t wish to overstate the seriousness of this but in the Ska world this is like a thousand 9/11s fucked a thousand Pearl Harbours. It’s The Matrix 3.  It’s disastrous.  We’re not quite sure what happened, possibly someone mis-spoke the sacred words or possibly someone’s spilled a drink on the book and now it’s malfunctioning like a fucked iPad.  We don’t know and there’s no handy warranty hotline.  In the past the book has fallen silent but never for this long, never this completely. It happened to Murray one time when he mis-spoke the sacred words and accidentally wrote four heavy metal albums.  That was a dark day indeed.  Research has shown that in the past when this happened, Ska holy men would perform certain rituals, sacrificing the first born male saxophonist on top of the nearest mountain, chicken worrying, that sort of thing.  In our desperation we tried these but no success.  Possibly the Pentland Hills aren’t really tall enough for mountains but we can’t keep slaughtering saxophonists like this. It’s messy and expensive. It’s also a little sad because oddly enough, you do become attached.

Our initial shock gave way to a profound emptiness; why had we been forsaken like this?  Utterly abandoned.  Personally, I hadn’t been so upset since that time I googled myself, only to discover that Google was also the name of a search engine.  So I Googled myself on that and that was just disappointing; I’m not going to lie to you, there’s a lot of stuff missing.  The experts call this emptiness, depression because of all the lying down you do and trust me it’s no laughing matter.   We’ve experienced a form of group depression in the past but we’ve always just worked through it with alcohol and violence, like adults, but this time was different.  The future of the band was at stake, we needed to try something different.  We decided we would seek out the psychiatrist who had worked with Metallica when they were experiencing problems some years back.  When we found him, we battered fuck out of him and that cheered us up quite a bit.  It was in this group exercise that we realised if we just worked together we could write a three minute ska tune by ourselves without the aid of ‘divine intervention’, or we could try dying.  I mean die trying.

Writing songs never really seemed like a group activity, more like a solo task such as knitting a balaclava.  Can you imagine nine people knitting one balaclava.  Of course you can’t.  Yet this was the position we found ourselves in, having to build some new songs from scratch democratically.  If Plato has taught us anything it’s that democracy is boring and that tyranny is usually more likely to get the songs written on time.  However it can be problematic having one person call the shots if they prove to be, say, a malignant narcissistic megalomaniac.  It does happen.  It’s no secret that George Harrison ruled The Beatles with an iron fist, forcing Lennon and McCartney to write all those clearly half baked songs while he learned the sitar.  The man was a monster.  For us, much like for the people of Iraq, this experiment with democracy was going to be a painful and bloody process and a lot of innocent people were probably going to die, but we had to at least try.  This ska balaclava wasn’t going to knit itself.

For the last six months we have been hard at work in the Bomblab, building, constructing our ska balaclava, our balasklava .. no that doesn’t work. More like something you have to construct in sections, like a Scalextric Set.. yeah let’s go with that.  A Bombskare Ska-lextric set.  It’s painstaking work.  Meticulous.  You really need an eye for detail.  And of course now that we are operating democratically, everytime we make a change to a song arrangement, move the middle eight section, change the key signature, we have to form a committee to explore the problem, search for viable solutions, feasability studies, environmental impact report, risk assessment; it’s time consuming but it’s thorough.  And it’s finally begining to pay off.  We have about half a dozen songs more or less in completion, another half a dozen half completed but still at the committee stage and probably another half a dozen songs that we’ve started but are still waiting to go up in front of the committee.  Plus many more ideas for songs, some of them very exciting, others bizarre and disturbing.  If you have caught any of our shows over the last wee while you’ve probably heard ’45’ or ‘the London tune’, both working titles.  The London tune recounts events that nearly saw us barred from a two mile radius of Battersea in a hilarious tale of alcoholism, paranoia and sex hair.  And 45, well that’s a political tune.

So we are now at the stage where we can start planning to go into a recording studio and make a third Bombskare album.  Next week we’re going to have a vote to see if we’re excited or not, frankly I’m not hopeful but possibly we might be slightly chuffed, who knows?

We have some ideas of where we would like to record.  My first choice is Neil Young’s kitchen which to be fair is no one else’s first choice.  There’s been talk of going on location to record in a remote castle in the Highlands perhaps, for the atmosphere.  We’ll probably end up recording in Granton, for the atmosphere.  We’ve noticed recently that a lot of bands have been recording in 3D so we’re looking into that.  The cost is probably prohibitive but we’re hoping a Bombskare 3D Album kickstarter might help.  At the very least we should be able to CGI the horns. That’ll save on a lot of shouting plus we are hoping to have Balrogs on this album.  The kids love Balrogs.

I was always told that the light at the end of the tunnel is probably a train heading straight for you but in this case the light could actually be a way out of this ska vacuum.  Jings. 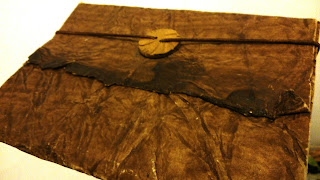 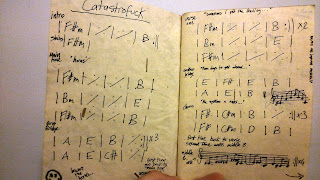 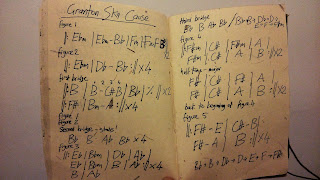 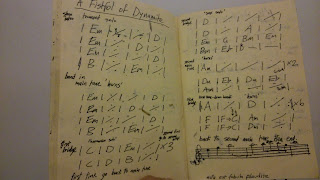 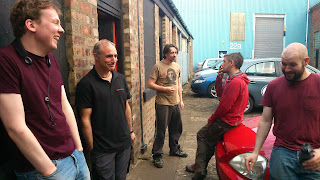